Originally announced at CES 2022 in January, the Samsung Neo QLED QN90B arrives in Brazil in sizes of 43, 50, 55, and 65 inches, with the two smaller variants highlighted.

Almost a month after confirming the arrival of the news, Samsung announced this Tuesday (14) the debut of the Samsung Neo QLED QN90B TV in Brazil, with expected price tags revealed. The most advanced LCD model of the brand, the device is launched in the country in 4 sizes, equipped with Mini LED lighting to offer more intense colors and contrast, and promises to be prepared for the gamer audience by having refresh rates of up to 144 Hz and countless game-focused features.

You can also check The 15 Best Gaming Monitors of 2022

Originally announced at CES 2022 in January, the Samsung Neo QLED QN90B arrives in Brazil in sizes of 43, 50, 55, and 65 inches, with the two smaller variants highlighted. Aiming to compete with LG’s 42-inch and 48-inch C1 and C2 OLED TVs, the more compact versions of the QN90B try to win over gamers by uniting Samsung’s Mini LED panel with a wide range of gaming features.

Both adopt VA LCD screen, technology recognized for delivering higher contrast than the IPS LCD of other TVs and monitors, combined with quantum dots, which would deliver “100% color volume” — the intensity of tones at different levels of brightness —, and the Mini LED lighting system, with thousands of lighting zones that turn on and off independently to generate deeper blacks in dark areas of the image. 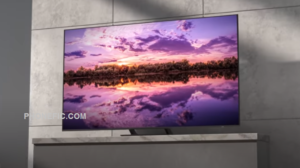 In these models, the technology enables Quantum HDR 1500, with a peak brightness of 1,500 nits when playing HDR content, supported here in HDR10+ formats, in Adaptive and Gaming modes, HLG for broadcasts, and HGiG for games. The display also features 4K resolution, a refresh rate of up to 144 Hz, and AMD FreeSync Premium Pro technology, which syncs consoles and graphics cards to the screen to ensure that the generated frames are not broken in the display.

Rounding out gamer features are Low Frame Rate Compensation, which maintains FreeSync sync even at frame rates below 48 FPS, Auto Low Latency Mode (ALLM), which enters Game Mode when detecting a PC or console to reduce command delay, LED Clear Motion feature, or Black Frame Insertion (BFI), which inserts a black frame between images to reduce motion blur, support for images in 21:9 and 32:9 aspect ratios, among others.

At the heart of the TVs is the Neo Quantum 4K processor, responsible not only for sound and image processing but also for the various intelligent features. The QN90B ships with the Tizen operating system, providing access to a variety of apps and smart device management with SmartThings, voice commands with Bixby, Alexa, and Google Assistant, and video calling with Google Duo.

Other highlights include split-screen Multi-View mode, connectivity with Wi-Fi 5 Dual Band and Bluetooth 5.2, four HDMI ports, a LAN port for wired Internet, and the Neo Slim design, which promises a slim body and almost absent edges around the display. , the SolarCell remote control, which recharges from ambient light, and a 10-year warranty against burn-in, the “ghost” of images on the screen.

The 55-inch and 65-inch versions share most of the technologies and features of the smaller sisters, but they bring some curious differences, starting with the reduction of the refresh rate, limited to 120 Hz.

Also absent are HGiG for HDR in games, Clear Motion LED for motion blur reduction, and Dolby Atmos. On the other hand, both ship Quantum HDR 2000, with peak brightness of 2,000 nits, and more robust sound systems, with 4.2.2 channels and 60 W of power.

The new Samsung Neo QLED QN90B TV is available from today on the Samsung website and at major retailers in the country, with the following suggested prices in Brazil:

During the pre-sale period, which runs from today (14) until June 30, buyers of the 43-inch or 50-inch Neo QLED QN90B TV will be able to choose promotional bundles with gifts to redeem, with three options available:

As always, the redemption will be made on the Samsung official website and can be done until August 14th.