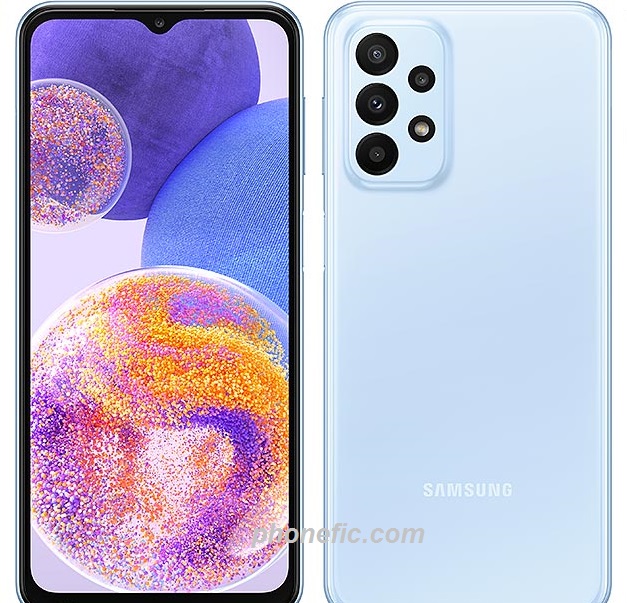 Under the hood, Samsung Galaxy A23 4G is powered by Qualcomm SM6225 Snapdragon 680 4G, 64GB/128GB of internal storage, and 4GB/6GB/8GB of RAM variants. In terms of camera, the phone sports a quad rear camera setup containing a 50MP + 5MP + 2MP + 2MP sensors. Upfront, the Galaxy A23 4G features an 8MP front camera that is responsible for selfies.

The mobile phone is very cheap and this price listed below is the best offer at the moment, so it is worth buying and will be a good buy for anyone who loves using Android 12 OS.

The Samsung Galaxy A23 4G has dual SIM, so you can use 2 phone numbers from different operators. With the 4G network, the internet will work very fast, because the speeds on this network reach 25 Gb /s.

The Samsung Galaxy A23 4G has expandable memory, SD cards can be inserted into the dedicated slot when needed.

A standard headphone jack will save you money as any 3.5mm port headphone can be plugged in without an adapter.

You can pay with the Samsung Galaxy A23 4G since it has NFC. You can’t use it as a remote because it doesn’t have infrared but there is Bluetooth available.

The Samsung Galaxy A23 4G and its 5000mAh battery work with fast charging. But it doesn’t have wireless charging or reverse charging, like most competitors like Vivo IQOO 9.

The device is not waterproof. It is not recommended to use it in a shower, bath, or in rain or snow.

Samsung Galaxy A23 4G price in Nigeria starts from NGN 143,000 which is approximately $260 depending on the variant and location. The phone is currently available for pre-order on Amazon and is expected to debut in the Nigerian market before the end of March 2022. Samsung Galaxy A23 4G will be shipped in Black, White, Peach, and Blue color options.

Redmi 10C is Launched with Battery Focus and 50 MP Camera

STAY CONNECTED WITH US:

iTel A27 Price in Nigeria and Full Specifications

Infinix Smart 6 Plus Price in Nigeria and Full Specs

ABOUT US
Phonefic is your crypto, phone review/prices, web development & general tech website. We provide you with the latest phone prices, web development tuts, and crypto updates from the tech industry.
Contact us: info@phonefic.com
FOLLOW US
© Designed By Benex Technologies - All rights reserved
%d bloggers like this: