Friday came and Elon Musk delivered what was one of the most anticipated announcements from Tesla’s AI Day. He revealed the first working prototype of the humanoid robot called Optimus, or Tesla Bot as others choose to call it.

Tesla used the same technology to power both the FSD, which is the self-driving A.I. inside Tesla cars and the humanoid robot. What’s weird though is that Elon chose to offer almost no information on this Friday night. This event was meant to serve as a way of showing that Tesla won’t stop at building cars and is a lot more than that. Musk even went as fast as to call his company the leader of the world of AI.

The Friday night show was opened with the reveal of the robot. It featured a prototype of the bot that came out from behind two doors, showing a very intricate system of wires and a silver-colored body. As the robot waved toward the crowd, the people, who were mostly potential future employees of the company and engineers, started to cheer loudly. Before getting back through the same doors it came out of, it didn’t forget to make a ‘raise the roof motion’ with both of its hands.

And believe it or not, that was all of it.

In his defense, Musk went ahead to say that “This is literally the first time the robot has operated without a tether, on stage tonight”. Although not very impressive to the untrained eye, the robot actually made the team onstage quite nervous when it debuted publicly. Elon also felt the need to add that although the robot could do a lot more than that, he didn’t want to risk seeing it fall on its face. He did have a video ready, that portrayed the robot doing other things, like watering plants or moving boxes in an office.

Musk also had something to say about the fact that his robot seems to be behind other, more advanced ones, like dancing droids made by Boston Dynamics.

Musk said that although other robots are trained to do other tasks, what they actually lack is a brain to guide them. Another difference is that most robots on the market are made in low volumes because of how expensive they are, added Musk. He said that his robot is expected to have a price of around $20,000, while still being a very capable robot. As a comparison, the Boston Dynamics-made robot dog has a price of around $75,000.

He also tried a recruiting pitch for interested engineers to join Tesla, by saying that this would be a great way for the prototypes’ shortcomings to be fixed.

Musk also felt the need to add that the Optimus still requires quite some work to be refined. He then added that this was also their reasoning for hosting this event, to get other talented people interested in the project and have them join Tesla and make this happen, so it can help millions of people.

Not only Musk, but other presenters as well, went over the importance of utility behind this robot. This is a robot that will actually have opposable thumbs that can be used just like a human uses theirs. Elon also threw a very optimistic number out there, saying that he plans to make thousands, if not millions of Optimus robots. As the company has already stated, its plans involve the deployment of such robots in all Tesla factories.

The talk then moved forward to FSD technology. According to tesla, the FSD tech costs about $15,000 to be activated on cars. According to the company, 160,000 customers have used this technology in 2022, as opposed to just 2,000 in the previous year. Of course, company officials place this growth on the “sweat and blood of the engineering team”. The team is currently working on other great features like getting to the point where the car can evaluate whether it is opportune to drive in front of a crossing pedestrian or what for them to pass so as to not scare them, negotiate stop lights, or navigate between different parking lots. 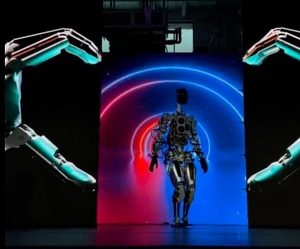 According to one person on the stage, the cameras on Tesla cars are able to process images of all the surroundings and their computers are able to make decisions every 50 milliseconds. A big part of the AI day presentation revolved around the image-processing capabilities and how the robots can learn to process an infinite number of possibilities around the vehicle in order to navigate as safely as possible.

No actual announcement or important update has been made about the popular Dojo D1 Chip, which was yet another important reveal of the last year. Tesla is continuing its work of trying to link several chips in the same system to have them work together as a way of increasing the processing power. This will be very helpful, especially for AI systems that need to factor in a lot of things from their surroundings to make the right decisions.

Among the most important things that the Tesla team seems to want to pass on to the audience is that its engineers are still working hard to make important changes for long-term projects.

The full Tesla AI Day 2022 is already uploaded to YouTube and you can watch it here: