Dragonflight will be the next major expansion for World of Warcraft . After the events of Shadowlands , the heroes of Azeroth return to their homeland, as do the great Dragon Aspects, responsible for protecting the world from threats. At the invitation of Blizzard, I tested the alpha version of the game in advance and I’ll tell you, in this post, why this is the best time for you to start or return to playing WoW.

First of all, it’s worth mentioning that I only had two days of access to Dragonflight, between the 12th and 14th of July. So I just got to play the expansion’s intro, play around with the new Caster class — and the race of Drachtyr — and test out some new systems, like the new talent tree, the reworked interface, and Dragonaria .

Despite the short time to test the game, I was able to talk to Patrick Dawson, production director for World of Warcraft: Dragonflight . In the interview, Dawnson reinforced at several points that the expansion is a new beginning for the MMORPG, in which players can return to the WoW roots. After experiencing the game in practice, I can say that I agree with it.

New talent tree allows for a lot of customization

The first point that makes me believe that Dragonflight is flying in a different (and good) direction is the overhaul of the talent system , which promises to give people more freedom so they can play the way they want.

Starting with Legion , World of Warcraft expansions began to include systems that only worked for a while. In the WoW community, this became known as “borrowed powers” ​​— meaning your character always gained very strong special abilities and equipment, but they became useless when new content was released.

Some examples of borrowed powers are legendary gear in Legion , Azerite powers and corruption in Battle for Azeroth , and Pact-exclusive abilities in Shadowlands . After the end of each expansion, all these features were forgotten, as if they never existed.

Dragonflight , meanwhile, puts aside borrowed powers to overhaul a core WoW system: talents . Since the mechanics change in Mists of Pandaria , adventurers have lost the ability to customize their characters’ playstyle. Back then, Blizzard decided to replace talent trees with a simple list.

In Dragonflight alpha , I created a Caster to try out the class’s abilities. As a test server, the character started at level 60, with dozens of points to distribute in the talent tree.

I confess that I got a little lost in the system and it took me about 40 minutes to understand what each talent did and find the best setup for me. I was also worried, wondering how it would be possible to quickly switch between the best talents for making dungeons, open world content and raids, for example.

In the interview with Dawnson, the production director explained that when the expansion is released, there will be an arsenal system to make it easier to swap trees.

With arsenals, it will be possible to choose specific talents for each game mode in WoW . With the press of a button, the character can switch between saved trees at any time — while out of combat, of course.

This already puts me at ease, because, despite seeming complex, talent trees allow you to play in different ways with the same specialization.

In the case of Casters, for example, the talents of the damage specialization — Devastation — allow you to focus on two different types of abilities: the red ones, which deal more damage over time with fire, or the blue ones with explosive arcane damage.

The basic Caster talent tree has three branches: one focused on damaging abilities, another recommended to increase the effects of improvements (buffs), and one indicated for players who specialize in healing allies.

You can customize classes and specializations the way you prefer, allowing new ways of gameplay, without having to borrow powers from external ways. Also, this change is important as it will be kept after Dragonflight . The new talent system has definitely revived my desire to play World of Warcraft .

Conjurers are modern and a lot of fun

As I’ve talked a lot about the Caster talents, it’s worth commenting a little about the class. At the beginning of the text, he said that I haven’t been able to play Dragonflight ‘s alpha for a long time. However, in these two days, I realized that the character is very modern and fun to use because of not only the dragon form, but also the “fortify” abilities.

Some Caster powers, such as Fire Breath and Eternity Surge, can get stronger the longer you hold down the skill button. Instead of being automatic, the spellcasting bar grows slowly , until it reaches the maximum threshold. That way, you can deal more damage or hit more enemies, if the situation of the fight allows, of course.

The Casters are completely different from anything I’ve seen so far in WoW . They are dynamic and, despite having mage-like gameplay, they also have a lot of mobility features. Like the Demon Hunters, the class can use wings to glide and soar into the sky for a few seconds.

Due to the short testing period, I was not able to observe the true potential of Casters and fortified abilities. However, I believe that the class has everything to be one of the most valuable in dungeons and raids, as it can deal a lot of damage, while a tank holds the attention of bosses and other enemies.

It is also worth mentioning the customization when creating a Dractyr. Blizzard took great care to include dozens of options to change from the appearance of the characters, to the type of clothing they wear when they are unarmored. Today, the dragon race has the most customizable elements. I just hope this expands to other races in the future.

Another point that really excited me about Dragonflight was the redesign of the World of Warcraft interface . Since it was launched in 2004, the MMORPG has stood still in time when it comes to window customization. For many years I relied solely on add-ons like ElvUI to modify my action bars and other visuals.

In the new expansion, WoW will finally have robust tools to change the position of various interface elements. In addition, important information, such as character profile, spellcasting bar and minimap, have been improved to make it easier for players to think during combat.

World of Warcraft has never been a simple game to understand. Even in my case, with 10 years of experience, Blizzard’s default interface confuses me, and I can’t even change the position of elements without using add-ons . These programs even make the game heavy and can even cause some bugs from time to time.

The changes in Dragonflight made the UI controls look like they were in Final Fantasy 14 — and that’s great. It’s simple to drag skill bars, save screen settings, and even create specific views for classes and specializations.

The new interface really pleased me as an experienced player. I also believe this new feature will benefit people who have never played World of Warcraft in their lives and want to experience the MMORPG for the first time. With the change, the visuals are modern, and the overall view of the game is much cleaner.

It’s worth mentioning that during Dragonflight ‘s alpha , not all UI changes had been implemented. Most of them will only be available at the launch of the expansion.

Dragonaria is a new and dynamic way to fly

Finally, I want to comment on the Dragonaria system, which arrives as a new way to fly through the Dragon Isles regions. Upon arriving at the location, players will have access to a new type of aerial mount, the Dracos , which can fly with much more style and speed than all other mounts in the game.

Flying has never been more fun and dynamic than in Dragonflight . When riding a Draco, an energy bar appears just below the character. This gauge fills up while the dragon is stationary or walking on the ground. Over time, the mount accumulates energy to use special moves, such as propulsion, pirouettes and dives with more speed.

In practice, when using Dragonaria correctly, it is possible to get around much faster than in conventional flight. However, Dracos can only be summoned in the Dragon Isles. This means that you still have to rely solely on traditional mounts to fly in other areas of Azeroth.

In previous expansions, Blizzard limited flight in the first few patches to make players explore new areas in detail without missing enemies or key locations. This problem doesn’t exist in Dragonflight , as people still need to stay on the ground with Dracos to build up energy before they fly.

Another interesting Dragonaria system is the possibility to customize the look of Dracos with armor and other accessories, making each mount unique.

Dragonflight is a new beginning for WoW

Despite being disappointed with the latest expansions of World of Warcraft , I believe that Dragonflight is the best time to get back into the game or start an adventure from scratch.

It is worth mentioning that the expansion is scheduled for release sometime in 2022 and is already available for pre-order on the Battle.net store. 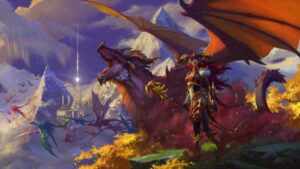 Dragonflight will be the next major expansion for World of Warcraft . After the events of Shadowlands , the heroes of Azeroth return to their homeland, as do the great Dragon Aspects, responsible for protecting the world from threats. At the invitation of Blizzard, I tested the alpha version of the game in advance and I'll tell you, in this post, why this is the best time for you to start or return to playing WoW.

The 10 best fighting games for PC and Consoles

The 7 best children’s games available for consoles and PC